"Freedom is a frightening thought." Dr. Yang in Alice

-Woody Allen: "...Change is death. That's an opinion of mine. I'm against change. Because change equals ageing, change equals the progression of time, the destruction of the old order. Now, you can say that somebody in a certain station of life wants nothing more that change, because they want the destruction of the old order. But ultimately, to me, change is not your friend. It's like nature. Change is your temporary friend sometimes...Change is a fair-weather friend, a short-term friend." [6]

-WA: "Well, nobody is really religious anymore, and people are running around craving some kind of spiritual life. They attach it to psychoanalysis, they attach it to acupuncture, to nutrition, to health food. People need some kind of inner life, something to believe in. There are many things that serve that purpose." [6]

-The idea for Alice (1990) came to the director when he sought an alternative treatment for a sty in his eye. Allen did not find relief in  the treatment, which involved using a cat's whisker to clear the tear duct. The fascination this kind of medicine held for wealthy women in the upper echelons of New York society intrigued Allen, despite his natural skepticism for such treatments. [3]

-Mia Farrow never got her equivalent of an Annie Hall, although Alice comes the closest. Annie Hall was ostensibly a love-letter to Diane Keaton, although it ended up being more about Woody Allen. Alice, while it’s not the superior film, is at least wholly devoted to Mia Farrow. In fact, the film’s primary shortfall is that it assumes you are equally entranced by Mia Farrow. [2] 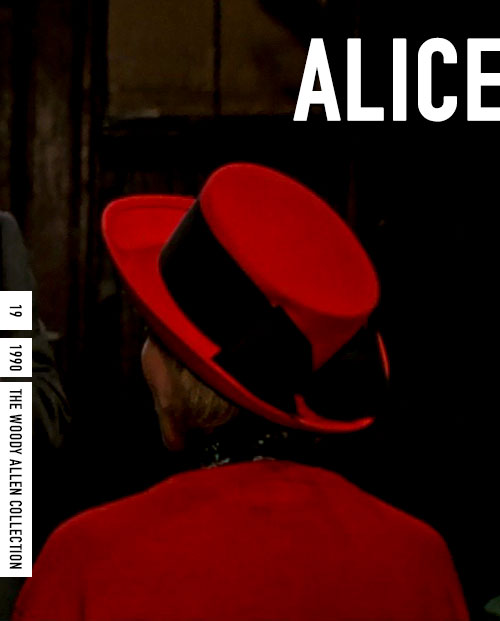 To deal with a back problem, upscale New Yorker Alice Tate, on the advice of several of her friends, visits Dr. Yang, an acupuncturist, for therapy. Dr. Yang diagnoses Alice's physical problem as a manifestation of her emotional issues, primarily her dissatisfaction with her fifteen year marriage to wealthy Doug Tate, and her superficial and pampered life filled primarily with shopping, spa treatments and face-lifts. Dr. Yang, who is much more than an acupuncturist, prescribes a course of herbal treatments, to which Alice adheres strictly despite her skepticism. Each individual herbal treatment has a different fantastical effect on Alice, which allows her at least to feel uninhibited enough to find out more about the man at her children's school to who she is attracted. She learns that he is divorced father Joe Ruffalo, a musician. The treatments also allow her, among other things, to communicate with a deceased ex-boyfriend, Ed, to ask for his advice on her situation. Through her relationship with Dr. Yang, Alice may come to some conclusions about what she wants to do with her entire life, and not just those parts related to Doug or Joe, and how best to move toward those end goals. [1]

-Filming began in late 1989, with Farrow taking on her first role since the birth of Satchel, her son with Allen, two years earlier.[3]

-Loosely based on aspects of Mia Farrow's own life. [3]

-On location in the Village, they permitted photographers to snap them with Dylan and Satch, on the swings in Abingdon Square Park, in a cozy family atmosphere. [7]

-The movie seemed like a through-back to the old days when Woody had presented an adorable Mia in A Midsummer Night's Sex Comedy, prompting one reviewer to observe that "he seems to have dedicated this funny valentine to his diminutive sweetheart." It was Mia's last good role. [7]

-Farrow and Allen both found the experience exhausting -- Farrow was still up many nights with her young son and Allen found the shoot an exercise in frustration. Constantly obsessing over details he shot and re-shot sequences, eventually checking briefly into a hospital by the end of the shoot. [3]

-According to Julian Fox in his book, Woody: Movies from Manhattan, the director was "maddened by small details like a wrong camera angle in a sequence filmed on Madison Avenue or the sudden glimpse of Mia's white dress under her deep-red coat as she walked across Central Park. The white dress ruined the aesthetics of the scene, he complained. 'All this compulsion - and all of that is no guarantee that the film is going to be any good.' [3]

-Alice stands out as the rare Woody Allen film that features special effects that support the paranormal quality of the story. Concerned about overshadowing the acting with elaborate visual effects, Allen mandated that the flying and invisibility sequences were to be shot in a manner that was as friendly as possible to the actors involved -- all on a limited budget. [3]

Love... Love is a most complex emotion. Human beings unpredictable. No logic to emotions. Without logic, there is no rational thought. Without rational, thought there can be much romance, but much suffering.

-According to Woody, Alice is a comedy version of Another Woman. [6]

-The film is a loose reworking of Federico Fellini's 1965 film Juliet of the Spirits. [8]

-In Alice - the original working title for the film was The Magical Herbs of Dr. Yang - Allen crafted a story about a hypochondriac upper-class housewife who discovers unusual things about her life when she partakes of various prescriptions written by a Chinese herbalist. [3]

-Allen named the film "Alice," because that was a "quintessential kind of rich WASPy name. It's not a Jewish name, an Italian name, an ethnic name. I wanted Alice a clean, blonde, rich person." -WA [6]

-The couple's adopted daughter, Dylan O'Sullivan Farrow, wound up playing the role of Kate in the film. [3]

-For the invisibility sequences, special effects technician Randall Balsmeyer used a soft-screen matte technique that he had used in Dead Ringers (1988) explaining, "To make people appear and disappear we used a soft-edged light, as they would usually disappear from the feet up. The last visible part was their head and that would fade." [3]

-William Hurt plays Mia's husband in the film. After coming off a string of hits, including winning an Oscar for his role in Kiss of the Spider Woman, he happily accepted union scale to work with Woody. He was quoted on set saying,"Do you believe it? We're actually in a Woody Allen movie!" [7]

-The role of Dr. Yang was played by Keye Luke, a character actor whose career dated back to his role as the Number One Son of Charlie Chan in the series of films about the popular Chinese detective. [3]

-His role as Dr. Yang was the final film role for Keye Luke. He died only weeks after this film was released. [1]

-Like all of Allen's films, Alice is full of amusing cameos by famous actors and media personalities: Patrick O'Neal appears in a scene with no dialogue, directors James Toback and Bob Balaban appear respectively as a professor of screenwriting and an admirer of Alice's; Australian supermodel Elle Macpherson makes her film debut here in a scene where she undresses before Joe Mantegna (invisible to her). [3]

-Sean Young filmed a small role but it was later cut. She had previously been deleted from Woody Allen's previous film Crimes and Misdemeanors as well. [1]

I've done things I didn't know I had in me.

I'm the wife, you know. I take care of the kids, I host the dinner parties, arrange the social schedule, try to look pretty so your friends can admire your taste. I've become one of those women who shops all day and gets pedicures. But I wanna be more. There's more to me.

-Like many of Allen's subsequent films, the reception for Alice was tepid in the U.S. and extremely enthusiastic overseas. [3]

-Roger Ebert said in his review: "Alice lacks the philosophical precision of Allen's Crimes and Misdemeanors, and the psychological messiness of Hannah and Her Sisters, and it also lacks the rigorous self-discovery of his underrated Another Woman. It's in the tradition of his more whimsical films, like A Midsummer's Night Sex Comedy." [4]

-Vincent Canby said in his review: "It is also his apotheosis of Miss Farrow, who has never looked more beautiful (she has bones to rival Katharine Hepburn's) and has never been more surprisingly funny and affecting. In this, their 11th collaboration, Miss Farrow gives a performance that sums up and then tops all of the performances that have preceded it." [5]

-Every Woody Allen Movie critic wrote: "...there are a number of familiar Woody Allen calling cards. There are a few of the usual themes — infidelity, family, writing. This is the third straight film (if you exclude the short Oedipus Wrecks) in which the film’s protagonist interacts with her memories. This is the third film in which Mia Farrow has a mother who’s a boozy, failed actress. Alice decides to become a writer, and comes up with a number of story ideas, all of which are ripped directly from her life — just like Holly in Hannah and her Sisters, Larry in Another Woman, and Alvy Singer in Annie Hall."

-Alice is a movie with no shortage of clever moments, but it’s less than the sum of its parts — mainly because its parts are often pulling in opposite directions. It’s structured like it should be all about Alice/Farrow, and her journey to happiness. The problem is, it’s so distracted and jumbled that it forgets to make Alice into someone we care enough to take that journey with. Instead of falling in love with Farrow, we’re left with a performance and a character that mostly engender indifference. [2]

-This movie earned Allen yet another Best Screenplay Oscar nomination. [2]

Review Headlines
A Starry-Eyed 'Alice' in Woodyland : While it's one that might be considered a piffle, it's charming piffle
-Lost Angles Times
Funny valentine to his diminutive sweetheart
The Washington Post
Woody Allen's Magical Realism Has an Herb for Every Plaint
-The New York Times
ALICE OF THE SPIRITS
-Cinemaretro
ALICE is an Overlooked Gem in Woody Allen’s Filmography
-The Solute
Jarring turns of plot rattle otherwise charming 'Alice
-The Baltimore Sun
Before and After
Alice 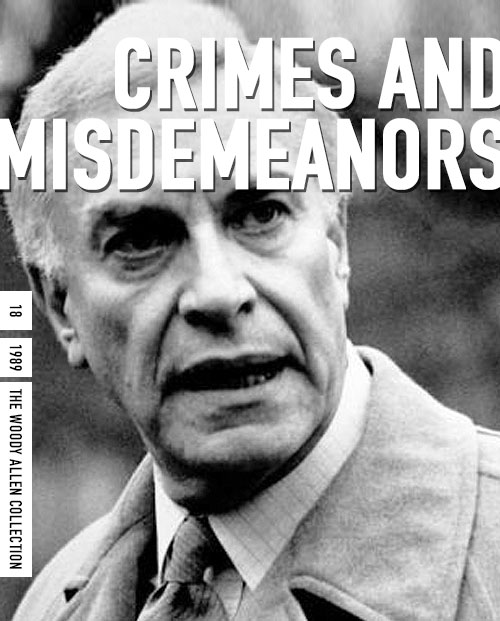 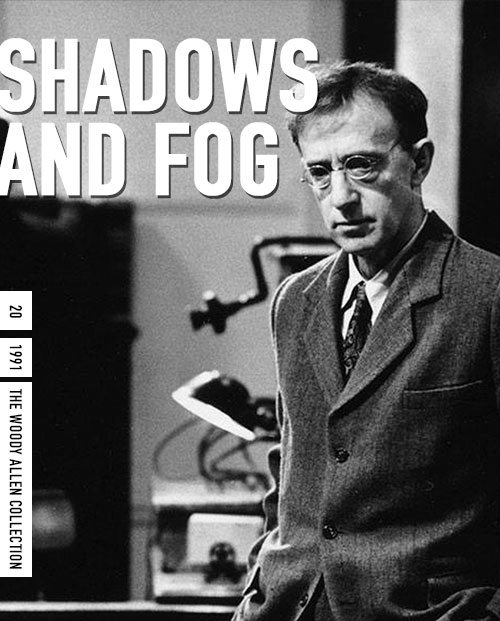