Narrator: "I love old radio stories. And I know a million of 'em. I've collected 'em down through the years, like a hobby. Anecdotes and gossip and inside stories about the stars. Plus, I recall so many personal experiences from when I grew up and listened to one show after another. This girl singing used to be a favorite at my house - one of many. Now, it's all gone, except for the memories."

-Radio Days (1987) is Woody Allen's paean to the golden age of radio, a kaleidoscopic and autobiographical look at the radio programs that were an essential part of his childhood. [3]

-Radio Days followed one of Allen's most ambitious films, Hannah and Her Sisters (1986), and seemed to be done for comic relief after the emotional complexity of the previous film. Allen himself told interviewer Stig Bjorkman, "I think of Radio Days basically as a cartoon. If you look at my mother, my Uncle Abe, my schoolteacher, my grandparents, they were supposed to be cartoon exaggerations of what my real-life people were like." Allen himself narrates the film, in the first person. [3]

-Interspersed throughout are visits back to the protagonist family and random interludes involving famous radio personalities. The movie has no over-arching story, just a series of vignettes, some involving recurring characters, some not. If the movie could be said to have a central theme, it would be the same one as The Purple Rose of Cairo: the power of entertainment, and the disappointment of real life. [2]

-“A film like “Radio Days” presents a particular type of problem. When you don’t have a ‘What happens next?’ story, when you’re working with anecdotal material, the trick I feel, is that you have to sustain each thing in its own brilliance, on its own rhythm, on its own style. So you really have to work very hard to make a movie like that, because you have to know that the anecdotes that you’re relating to the audience an hour, an hour and a half into the film are not going to bore them. That they’re still going to find them fresh and funny. It’s difficult kind of film to do, a non-plot, a non-conventional plot film.” –Woody Allen [4] 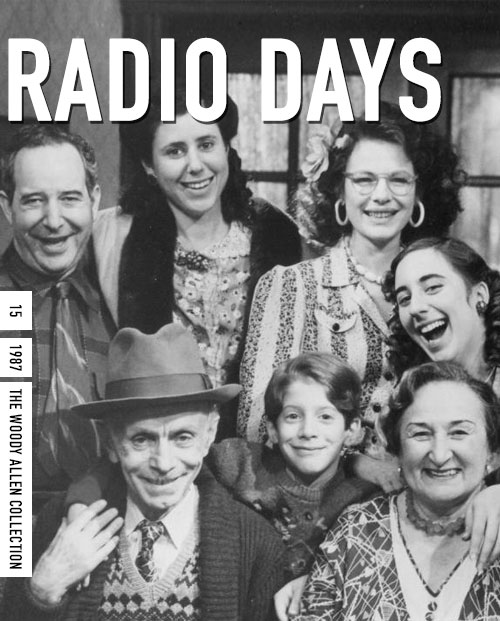 A man reminisces about his youth, growing up in the 1930s and 40s in New York. We see and hear stories of himself, his parents, neighbours and friends and local celebrities. The common denominator in all the stories and in the overarching plot is the presence of the radio - it brought music, news, stories, escape and comfort, made stars of everyday people and was often the glue in families and relationships. [1]

-Allen's use of music in his films has always been masterful, and Radio Days is one of the finest examples of his mastery. In fact, he told Bjorkman, music was the original starting point for the film. "It originated from an idea that I wanted to pick out a group of songs that were meaningful to me, and each one of those songs suggested a memory. Then this idea started to evolve: how important radio was to me when I was growing up, and how important and glamorous it seemed to everyone." [3]

-[An] important distinction of this ‘genre’ is that the movies are deliberately told from the perspective of the director as a child, with accompanying childlike sense of wonder. Characters and drama are exaggerated, while urban legends and make-believe stories are told as if they’re historically accurate. As children, we decide how we want to perceive and remember things, and these movies try to put us back behind those eyes. [2]

-Interestingly, in a movie that frequently veers off into fantasy, Allen-as-child and Allen’s mother are portrayed more subtly and realistically than they were in, say, Annie Hall or Stardust Memories. This is a wise decision on Allen’s part. With a movie that shoots off in all directions and has a hard time staying focused, the family provides the movie’s emotional and narrative anchor. [2]

-Near the end of the film, Woody included a scene of families listen to the news of a young girl who fell into a well. Woody said his reasoning to include this somber scene was to, “show [his] relationship to his parents. And to show something which was a typical radio situation. You not only heard funny things and trivial things and sports and quiz shows on the radio. It also brought you tragic events. That was a part of everybody’s life as well.” –Woody Allen [4]

I never forgot that New Year's Eve when Aunt Bea awakened me to watch 1944 come in. I've never forgotten any of those people or any of the voices we would hear on the radio. Though the truth is, with the passing of each New Year's Eve, those voices do seem to grow dimmer and dimmer.

-Most days Mia brought six month old Dylan to the set…No sooner did Woody glipse Dylan than he dropped everything and ran over to take her in his arms, then continue to direct while holding her. Whenever another person wanted to take her, he became noticeably jealous. To capture her attention again, he would make faces, put his cap on her head, and kiss her belly, until she screamed with laughter. [5]

-Gene Siskel felt certain that he was witnessing a turning point on Woody’s career. Despite his neuroses, he was a “happy man,” and his new picture [“Hannah and Her Sister” about to be released and in-production, “Radio Days”] was “the life-affirming work” of a director at the height of his game. [5]

-This is the only Woody Allen film in which both of his frequent collaborators and longtime companions Mia Farrow and Diane Keaton appear. [1]

-Casting Director Juliet Taylor suggested Seth Green for the role. “Seth was amoung the chld actors she suggested, and when he came in, he clearly was a natural actor…I rarely test people in front of the camera. You could tell right away. He was good enough without testing. He was a very brilliant kid, very smart.” –Woody Allen [4]

-The character of Sally originally wasn’t in the film. Woody wanted a role for Mia Farrow so on the first day of shooting they tried “a number of different voices and things. And then, when I saw which one was funny, we started to develop that character for her.” [4]

-Both Joe and Woody Allen were once in the midst of being whipped with a belt as punishment for pouring purple dye on his mother’s new fur coat when the story of the girl in the well shot out over the radio in the living room, and his parents, struck with the thought of what it must be like to lose a child, stop whipping and start hugging. [2]

-When the Uncle goes next door to confront the communists, the man screaming about the plight of the "worker" is Larry David, who can be seen in a long shot. [1]

-The amusement park young Joe walks by in the film is old Rockaway Playland located in Rockaway Beach, New York. The park was in its last year of operation when the film was being made in 1987 and was subsequently closed and demolished. After remaining an empty lot for many years the property, in the late nineties, had been developed with houses built on it. Ironically the Beach 98th train station on the IND A train still holds the name PLAYLAND in its station name. [1]

-Tony Roberts makes his last appearance in a Woody Allen movie until Allen’s 2001 9/11 benefit short film “Sounds From a Town I Love.” [2]

-William H. Macy appears not only as a radio voice, but also as one of the radio actors at the Pearl Harbor Announcement. [1]

-In the movie, Joe’s dad is a taxi driver but keeps his profession a secret from his family. Woody Allen’s father was also a cab driver who never told his children what he did. [2]

-In the 1940s, the term "Radio Days" was often used to describe that type of employment for those in the entertainment field. [1]
‍
-After listening to a show about U-Boats, Joe sees one surface just off the coast of Coney Island. As a kid, Allen was constantly convinced he was seeing Luftwaffe overhead and U-Boats just off the beach. [2]

-A scene featuring Chris Elliott was cut from the film; in 2011 he recalled: "I'd had a beard at the time, and I think they didn't think my mustache looked the proper period. So they had me shave my beard to a mustache. And, boy, did I look odd." [1]

-A few years earlier the pregnancy might have inspired Woody to marry…But their relationship had grown complicated, and apparently not even Mia felt that the birth of a baby was sufficient reason for marriage. [5]

-Presumably, more children simply did not interest him very much at this point…Dispirited with Woody’s indifference, which she knew was not her imagination, she withdrew emotionally and even considered breaking off with him. [5]

-Mia and Woody fought over the baby’s name. Woody suggested Ingmar, which she wasn’t crazy about and Satchel, after Leroy “Satchel” Paige, a famous black pitcher in the 40s. Woody won out with Satchel. [5]

-Eventually the birth of Satchel would expose all the painful fault lines in their relationship. [5]

It's so beautiful. Boy, what a world... it could be so wonderful, if it wasn't for certain people.

This is a coincidence. I meet nobody from the old neighbourhood in years. I finally do, and I gotta kill her.

-Reviews for Radio Days were mostly raves, although there were a few dissenters, such as the always-acerbic John Simon of the National Review, who called it "really a congeries of blackout sketches barely bothering to make like a connected narrative, scoring now and then and falling flat the rest of the time." [3]

-Variety called it "One of Allen's most purely entertaining pictures. It's a visual monolog of bits and pieces from the glory days of radio and people who tuned in.... Radio Days is not simply about nostalgia, but the quality of memory and how what one remembers informs one's present life." [3]

-Roger Ebert compared it to Fellini's Amarcord (1973). "What they evoke isn't the long-ago time itself, but the memory of it." [3]

-Vincent Canby wrote in the New York Times, "Radio Days is so densely packed with vivid detail of place, time, music, event and character that it's impossible to take them all in at one sitting." Allen's warm, funny screenplay and Santo Loquasto's nostalgic and detailed art direction both received Oscar® nominations. [3]

-Every Woody Allen Movie critic wrote: "The best thing the movie has going for it is its humor. It’s willfully silly in a freewheeling sort of way that we haven’t seen since the comedies of the early ‘70s. I don’t exactly miss those films, but I’m nostalgic enough for them that I appreciated the throwbacks." [2]

-Allen described the movie as a “purely personal, self-indulgent” project, and he’s right. His love of the era and all its chintzy glamor shines through, and he’s stacked the cast with all his friends (in addition to Aiello, Kavner and Farrow, Diane Keaton, Wallace Shawn and Tony Roberts all show up). [2]

Review Headlines
‘Radio Days’ tunes in to the past
-Associated Press
A slight but sweet pastiche of boyhood memories, big-band melodies and Magnavox fantasies of the '40s
-The Washington Post
WOODY ALLEN'S FOND REMEMBRANCES OF 'RADIO DAYS'
-The New York Times
Although lacking the bite and depth of his best work, Radio Days is one of Woody Allen's most purely entertaining pictures
-Variety
‘Radio Days’ Tunes Into Those Innocent Dial-Turning Times
-Los Angles Times
A Deftly Flawless Work
-The Woody Allen Pages
‘Radio Days’: The best of whacky Woody Allen fun
-Kentucky New Era
Before and After
Radio Days 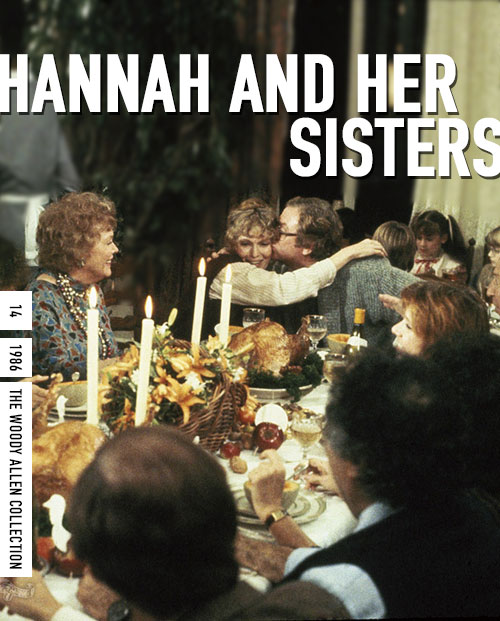 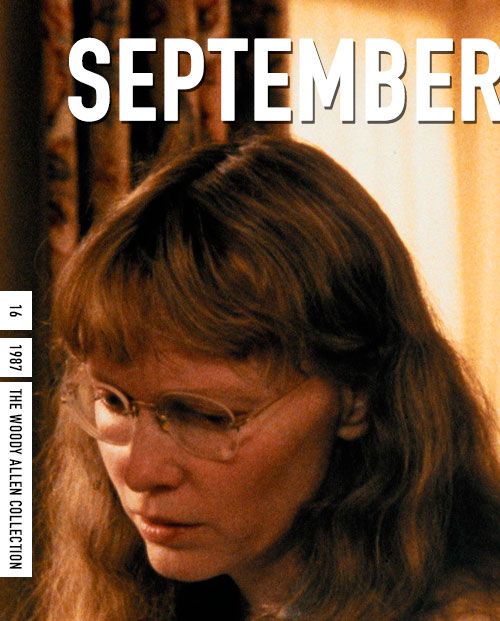