-The title is both pun and a thesis statement. Yes, in keeping with the literal title, the final sequence provided the happy Hollywood ending that classical film narrative technique requires. At the same time, the film also offers a portrait of an industry weakened through generations of inbreeding, twitching in commercial straightjackets and now gasping for its final breaths amid a miasma of artistic narcissism. [8]

-In show business, survival depends on serial reinvention. Those celebrities who have perfected the routine are legendary for it—Madonna, Michael Jackson, Steven Spielberg (from Jaws to Private Ryan). Others are equally famous for always seeming consistent, if not tedious, like Mick Jagger or Robert Altman, maybe. Ingeniously, the industry offers ego-massaging wiggle room on both ends of this spectrum. Desire and delusion, creativity and vanity: a little shake-and-stir, and voila! reinvention starts to resemble cunning consistency, while sameness looks like a more discreet transformation. [3]

-Along with Small Time Crooks and The Curse of the Jade Scorpion, Hollywood Ending feels like the conclusion to a new unofficial trilogy, one that is the inverse of the eclectic relationship threesome of Hannah and her Sisters, Crimes and Misdemeanors and Husbands and Wives. All three movies since 2000 were written at the same time, and all three have a central hook that is ingenious but demonstrably thin for feature-length. In another universe, it’s not hard to imagine Allen having three new comedy classics on his hands had he used the films’ central ideas as starting points, instead of just propping them up with filler and padding. [2]

-Stephen Hunter for the Washington Post wrote: "...The funny thing, or maybe it's the sad thing, is that when the ancient one busses the tender one it's one of the few moments when poor "Hollywood Ending" comes alive. In most other aspects, it seems more like a therapy session than a movie, a discussion between its auteur and his shrink. It's about a seemingly washed-up film director (hmmmm?), angry that his audience has deserted him (hmmmm? again), bitter over the breakup with a treasured partner (hmmmm! thrice), bitter over a shattered relationship with his son (hmmmmm quatro). He responds to this with cosmic hypochondria (hmmmm V!). That's too many hmmms for a movie review, so we now depart from the medical specialty of psychiatry and return to the film. "Hollywood Ending" is minor Woody Allen from that saddest of all possible worlds: the one where there may be no more major Woody Allen left. It feels old, tired and given-up-on, maybe three drafts shy of minimal production level." [7] 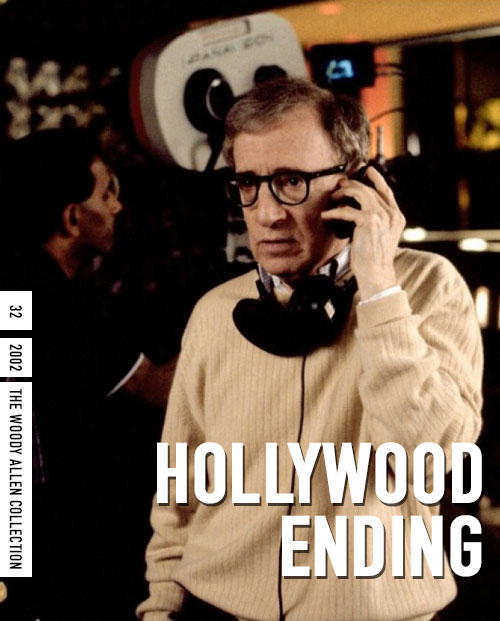 Val Waxman is a film director who was once big in the 1970's and 1980's, but has now has been reduced to directing TV commercials. Finally, he gets an offer to make a big film. But, disaster strikes, when Val goes temporarily blind, due to paranoia. So, he and a few friends, try to cover up his disability, without the studio executives or the producers knowing that he is directing the film blind. [1]

-The concept of a blind film director makes a brilliant satirical point, but the comic turns on blindness were exhausted in vaudeville seventy years ago. Waxman looks in the wrong direction during conversations, resorts to double-talk to avoid making decisions on props, costumes and set decoration, stumbles over furniture and fails to perceive a bare-faced (and bare almost everything else) seduction from his leading lady. Most of the time the sight gags are sadly predictable. Pun intended. [8]

-Once Val goes blind, the movie admittedly picks up. Hollywood Ending is not without laughs, but it’s funny in the gentlest, tamest, safest way possible. There are a lot of moments in which Val falls down, walks into walls, and talks to someone without realizing who they are. How funny this is is a matter of opinion, I suppose, but beyond the original idea, which is admittedly pretty clever, few would argue that any of the jokes in Hollywood Ending are original or insightful." [2]

-Despite its slipshod script and squandered possibilities, Hollywood Ending has its moments. The whole is much less than the sum of the parts, it’s true, but some of the parts are quite entertaining. In addition, the sustained satire keeps its focus clearly in place throughout the meanderings of the narrative. At the end, Waxman/Allen seems to reject the American film industry, even in its New York incarnation, no more on that. [8]

-Perhaps [my] review is overly gentle with a clearly disappointing effort. Despite Woody Allen’s legendary contempt for critics, reviewers like me still treat him gently, and with good reason. What other filmmaker has so definitively rejected the computer-generated flash and glitter of action-adventure comic books and gross-out sex comedies aimed at 12-year olds? Who else provides adults with consistently funny, yet thought-provoking films on a yearly basis? Follow my example. Take a tour of your own video shop in search of a new release that does not assault your senses and insult your intelligence. You will find very few. We should be grateful for a second- or even third-rate Woody Allen film, since it’s a good deal better than just about anything else you’ll find in multiplex or video stores these days. I’m disappointed. I’m grateful... [8]

You know, I would kill for this job, but the people I want to kill are the people offering me the job.

-Woody: Well, what gave me the idea for the movie originally was that my ex-wife was allowing me to make a movie because she had run off with a powerful studio head and I resented them both, but I had to take the job because I wanted to make a comeback. And that scene sort of epitomized that relationship. [6]

-The film opened the 2002 Cannes Film Festival. [1] ...because he was so proud of his movie, Allen accompanied it to France and attended the premiere. [2]

-Despite the fact that this was filmed in the standard spherical format, "Filmed in Panavision" is listed in the end credits. [1]

-Haskell Wexler was fired a week into production as he and Woody Allen couldn't agree on how to film certain shots. He was replaced by Wedigo von Schultzendorff (Igby Goes Down). Although one of Hollywood's most respected cinematographers, this is not the first time Wexler has been fired from a production, One Flew Over the Cuckoo's Nest being a notable example. [1]

-The first Woody Allen not to receive a cinema release in the UK. [1] It got the direct-to-DVD burial in the U.K. [2]

-With the move to DreamWorks from Orion, Woody Allen had to submit to budget cuts. One of the casualties was his regular editor Susan E. Morse. [1]

-Allen inexplicably claims that Hollywood Ending is one of his better movies. He said the screenings and early reviews were so positive that he was sure he had a huge hit on his hands (although the way DreamWorks scaled back the scope of the release suggests that they knew better). [2]

-More art imitating life: Val says that he only likes to use foreign cinematographers because they bring a unique texture to the film. Every cinematographer that Allen has worked with since he parted ways with Gordon Willis in 1985 — Carlos Di Palma, Sven Nykvist, Fei Zhao — has been foreign-born. Getting even more specific, Val wants to hire a certain Chinese director who has experience working in the era — Sweet and Lowdown was the first movie on which real-life Woody worked with real-life Chinese cinematographer Fei Zhao, whose most famous Chinese-language film had been set in the same time period. [2]

Our marriage wasn't going anywhere. Where do you want it to go? Where do marriages go? After a while they just lay there. That's the thing about marriages.

‍-Roger Ebert for the Chicago Sun-Times wrote: "The situation is funny and Allen of course populates it with zingy one-liners, orchestrated with much waving of the hands (he's a virtuoso of body language). But somehow the movie doesn't get over the top. It uses the blindness gimmick in fairly obvious ways, and doesn't bring it to another level--to build on the blindness instead of just depending on it. When Waxman confesses his handicap to the wrong woman--a celebrity journalist--because he thinks he's sitting next to someone he can trust, that's very funny. But too often he's just seen with a vacant stare, trying to bluff his way through conversations."

-Roger Ebert concludes: "I liked the movie without loving it. It's not great Woody Allen, like "Sweet and Lowdown" or "Bullets Over Broadway," but it's smart and sly, and the blindness is an audacious idea. It also has moments when you can hear Allen editorializing in the dialogue. My favorite is this exchange: "He has made some very financially successful American films." "That should tell you everything you need to know about him."

-Elvis Mitchell for The New York Times wrote: "When Woody Allen's newest movie, ''Hollywood Ending,'' is spitting one-liners, the picture has the gone-delirious feel of Theolonious Monk crunching notes, a wired, jazzy rhythm specific to this comic. Once the energy from the jokes dies down, we're left with a project so stale you feel like opening a window to let some air in."

-Film critic Bryant Frazer thought that it suffered from poor editing. He wrote, "What's most frustrating is the sense that Hollywood Ending could have been quite a bit better than it actually is. At 114 minutes, it's decisively lacking in the brevity that used to characterize Allen's pictures - even the super-serious, Bergman-inspired stuff. Worse, his timing seems to be off -- the filmmaker who was once notorious for cutting his films to the absolute bone now gives us rambling, overlong shots featuring performers who almost seem to be ad libbing their dialogue. I ran to the Internet Movie Database to investigate, and discovered what may be the problem - Susan Morse is gone. Morse, the editor who had worked with Allen since Manhattan in 1979 and who turned into a real soldier by the time of the jazzy montage that characterized Deconstructing Harry, was reportedly a victim of budget-cutting within the ranks." [5]

-Stephen Hunter for the Washington Post wrote: ""Hollywood Ending" is minor Woody Allen from that saddest of all possible worlds: the one where there may be no more major Woody Allen left. It feels old, tired and given-up-on, maybe three drafts shy of minimal production level....But everything else about "Hollywood Ending" feels underdeveloped; nothing has been thought out, nothing has been polished or smoothed, the whole thing feels thrown desperately together."

-Every Woody Allen Movie website critic Trevor Gilks wrote: "Hollywood Ending is a complete non-event of a movie. A lifeless experience that exists at the exact mid-point between good and bad. Characters are introduced, people talk, events unfold, but as soon as Hollywood Ending is over, it feels like it never existed. -- With all his movies — good and bad — Woody Allen tends to wear his intentions on his sleeve, but it’s hard to tell what exactly he’s going for with Hollywood Ending. It advertises itself as a silly comedy in the vein of Small Time Crooks, but it goes for long stretches of time without any jokes. Sometimes it seems to take its story very seriously, and other times it’s willfully, deliberately preposterous. It’s as if Allen sat down to write a movie without deciding beforehand what kind of movie he wanted to make." [2]

-Owen Gleiberman for Entertainment Weekly wrote: "The high-concept broadness of the blind-Woody gimmick promises a slapstick jamboree that never arrives...For Woody, it's looking more and more like the end of his days of whine and neurosis. 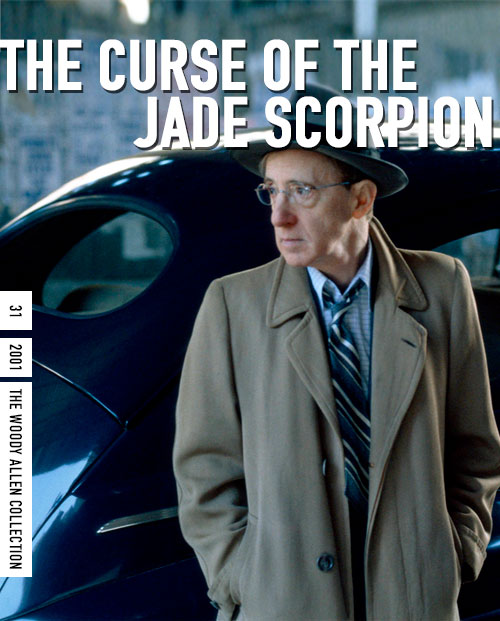 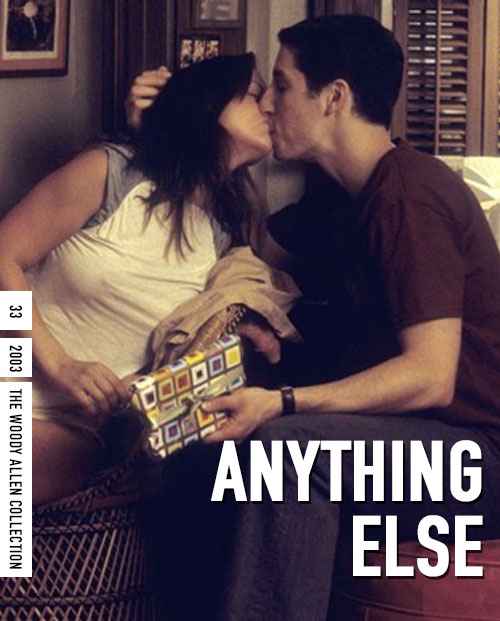