-More than anything, "Love and Death" was a happy accident. Originally, Allen was trying to write a romantic comedy about two clever New Yorkers who solve a murder but wasn't able to work out the details to his satisfaction. With time running out on his script deadline, he happened to notice a book on Russian history in his library and the ideas began to flow. (He would later return to flesh out the characters of his two New Yorkers in Annie Hall (1977) and work out the crime-solving plot in Manhattan Murder Mystery, 1993). [3]

-Two weeks after telling  Eric Pleskow, one of United Artists top execs,  that he was wrapping up the “Manhattan murder mystery script, the UA exec was surprised to receive the first draft of a screenplay about the Napoleonic wars, set in Czarist Russia. [9]

-Woody says he tore the script up and decided to do a 19th century movie about the meaninglessness of existence and planned to shoot it in Russia. [9]

-United Artist execs didn’t expect much from the picture (because of the subjust matter), but green lit it because of Woody extraordinary track record so far with them.

-Filmed in Hungary with Oscar-winning cinematographer Ghislain Cloquet. In the moments when Allen is off-screen, Love and Death looks more like "Lawrence of Arabia" than "Take the Money and Run." [2]

-This is Diane Keaton’s third appearance in a Woody Allen movie, and second in a row. She is a natural romantic comedy actress — almost effortlessly, she comes across as likable, sweet, interesting and relatable. Amidst the goofiness of the last two films, though, she’s relying on a somewhat different talent — her sincerity and wide-eyed obliviousness is an excellent contrast to Woody Allen’s typical obsessive worrying about everything. [2]

-While it might not have seemed a likely commercial prospect for a film in 1975, it's even harder now to imagine a major studio bankrolling a project like "Love and Death" despite the financial clout of the director or star. Yet, "Love and Death" touched on all the familiar Allen themes his fans had grown to love - relationships, sex, marriage, and self-deprecation - in the context of a nineteenth-century story. [3] 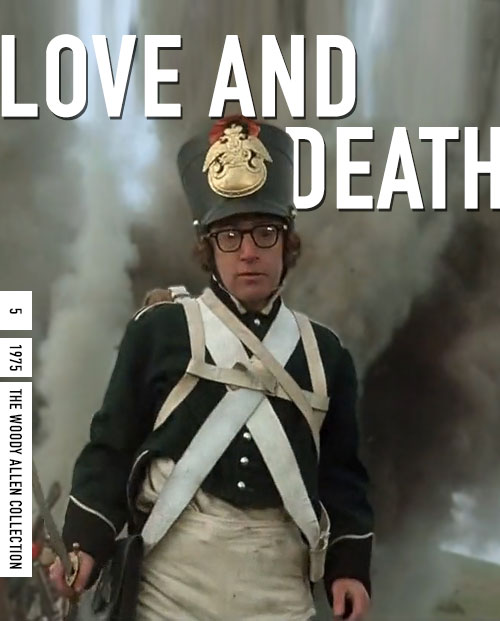 In Russia, Boris Grushenko is in love with his pseudo-intellectual cousin Sonja, who loves him since he too is a pseudo-intellectual, but she is not in love with him. Instead she is in love with his brother Ivan. But as Ivan doesn't seem to return her affections, she is determined to marry someone - anyone - except Boris. If that person isn't the perfect husband, then she has to find a suitable lover in addition. Boris' pursuit of Sonja has to take a back seat in his life when he, a pacifist and coward, is forced to join the Russian Army to battle Napoleon's forces which have just invaded Austria. Despite Sonja not being in the picture while he's away at war, Boris' thoughts do not stray totally from women. Although they take these two divergent paths in their lives, those paths cross once again as they, together, both try to find the perfect spouse and lover, and try to assassinate Napoleon. [1]

-"Love and Death" was not an easy shoot. Woody sprained his back after falling on some ice in front of the Eiffel Tower, Diane Keaton suffered minor injuries to her eye from a violin bow, Producer Charles Joffe was rendered inactive by a bout of food poisoning, a supporting actor broke both legs in a car accident, the negative for an elaborate banquet scene was damaged and the scene had to be re-shot, the list goes on and on. [3]

-Woody Allen was so concerned about the quality of Budapest's food that he consumed only canned food and bottled water that he had brought with him from America. As a result, Allen was one of the few of his movie's cast and crew who did not suffer dysentery while filming. [1]

-In a later Esquire article, Allen said, "When good weather was needed, it rained. When rain was needed, it was sunny. The cameraman was Belgian, his crew French. The underlings were Hungarian, the extras were Russian. I speak only English - and not really that well. [3]

-Each shot was chaos. By the time my directions were translated, what should have been a battle scene ended up as a dance marathon. In scenes where Keaton and I were supposed to stroll as lovers, Budapest suffered its worst weather in twenty-five years." [3]

-When asked in the book “Woody Allen: A Life in Films” by Richard Schickel, what influenced him to write Love and Death, Woody replied, “I had, of course, always loved the Russian classics, and I was trying to do a film with philosophical content, if you can believe it. And I learned that it’s hard to do a film with philosophical content if you’re too broad. It’s just like people can’t see the structure of a film in a board film, they also don’t take seriously anything that you might be wanting to say in a comedy. Or any issues you might be wanting to deal with, or little comments you want to make – not desperately profound, or original, but any little serious pretensions you might have in the film go unnoticed, because what gets noticed always are the jokes, the snappers, the one-liners, and the sight gags.” Woody goes on to say that people at this time only judged his movies if the liked the jokes and if they didn’t, they didn’t like the flick. [8]

-Woody has a run-in with Death, looking much like the scene in Bergman’s “The Seventh Seal.” [2]

-The wheat scene with towards the end of the film is a direct visual parody of Ingmar Bergman's classic “Persona.” The juxtaposition of faces is an homage to Bergman's trademark shots. [1]

-The shots of the lion statues edited into the love scene between Boris and the Countess, and the shot of the soldier being shot in the eye through his glasses are parodies of similar statues in “Battleship Potemkin,” shown during the Odessa Steps massacre scene. [1]

-Several scenes re-enact/pay homage to Charlie Chaplin and the Marx Brothers; a snowy shoot-out mirrors the one in Robert Altman’s “McCabe and Mrs. Miller.” [2]

-Allen even pays homage to himself. Although some consider this as Woody merely being lazy.

-“And the comedy, sadly, is filled with the first signs of the laziness and self-plagiarism that would one day topple the Woody Allen artistic empire. Love and Death is a lot like Sleeper. It’s also a lot like Bananas, and occasionally a lot like” Take the Money and Run.” The familiarity of the movie caught me off-guard, especially after the freshness of Sleeper. There’s an army training montage and a dream sequence borrowed from “Bananas,” a seduction borrowed from both “Sleeper” and “Take the Money and Run,” a failed attempt to amuse a King reminiscent of the Allen-as-court-jester chapter of “Everything You Always Wanted to Know About Sex,” and a handful of similar-sounding jokes about sex, death, insurance salesmen, etc.” [2]

-Although this film has a great deal of slapstick humor, there is an entire additional layer of comedy if the viewer knows what Woody are references and especially if they’re a Russian literature enthusiast (how often is that required of a viewer?).

-The movie is considered a spoof of the Russian novel, particularly the works of Lev Tolstoyand Fyodor Dostoevsky, particularly "The Idiot", "The Gambler", "War and Peace", "Anna Karenina", "Crime and Punishment", and "The Brothers Karamazov". [1]

-Woody also filmed some scenes in Paris. It wouldn't be until 1996 and "Everyone Says I Love You" that Woody Allen would make another film outside of the New York area. [1]

-The film negative for the big banquet scenes got damaged and the whole sequence had to be re-shot. [1]

-When Boris leaves for the army, he is shown carrying preserved butterflies and a butterfly net as homage to Russian-born author Vladimir Nabokov. [1]

-The wheat scene with towards the end of the film is a direct visual parody of Ingmar Bergman's classic Persona (1966). The juxtaposition of faces is an homage to Bergman's trademark shots. [3]

-The soundtrack was originally scored with the music of Igor Stravinsky, but Woody Allen thought it made the scenes "unfunny". He discovered Sergei Prokofiev's lighthearted music worked far better. [3]

-The shots of the lion statues edited into the love scene between Boris and the Countess are parodies of similar statues in Bronenosets Potyomkin (1925), shown during the Odessa Steps massacre scene. [3]

The End of Allen’s “Early Funny Ones”

-“Love and Death” coming between Allen's Sleeper and Annie Hall, it is in many respects an artistic transition between the two. Allen considers it the funniest film he had made to that time. [3] [4]

-It’s easy to see Woody grow as an artist through his first 6 movies we’ve watched.  Woody was allowed the creative freedom that help hone his skills of being a, actor, director and writer. In a lot of ways his first 6 films are similar, yet each manage to offer something unique. He started simple, relying on his skills of being an on-stage comedian with “Take the Money and Run” and “Bananas.” He broadened his range with “Play it Again, Sam” and “Everything You Wanted to Know about Sex” and increased his production values, developed more complex plot structure and brought more philosophical context to “Sleeper” and “Love and Death.”

-Woody grew as an artist right before the audience’s eyes and they were along for the ride the entire time. Although his early movies weren’t always huge money makers, they always turned a profit and United Artists were proud of their “prestige item.” [9]

-The next phase of Woody’s career transforms him from a well-known comedian, turned writer/director and budding star into a superstar like no other during the late 1970s. In just ten years, he went from amateur filmmaker to an Oscar winning auteur and was begun to be seen in the same light as the directors he admired.

If it turns out that there IS a God, I don't think that he's evil. I think that the worst you can say about him is that basically he's an underachiever.

Sonja: There are many different kinds of love, Boris. There's love between a man and a woman; between a mother and son... Boris: Two women. Let's not forget my favorite.

-“Love and Death” was met with incredible praise when it was released. The New York Times and Roger Ebert both raved about its ambition and sophisticated humor. [2\

-Roger Ebert gave it three and a half stars: “Miss Keaton (Diane Keaton) is very good in “Love and Death,” perhaps because here she gets to establish and develop a character, instead of just providing a foil, as she's often done in other Allen films ... There are dozens of little moments when their looks have to be exactly right, and they almost always are. There are shadings of comic meaning that could have gotten lost if all we had were the words, and there are whole scenes that play off facial expressions. It's a good movie to watch just for that reason, because it's been done with such care, love and lunacy.[7]”

-At the 25th Berlin International Film Festival in 1975, the film won the Silver Bear for an outstanding artistic contribution.[6]

-Judith Crist in New York Magazine noted Woody was “going for the character rather than the cartoon” and also applauded his acting as “perfection.”  [9]

-Penelope Gilliatt said it was Woody’s “most shapely” film. [9]

-Vincent Canby raved about “Woody’s War and Peace,” as personal a film as “any American star-writer-director has made since the days of Keaton, Chaplin, and Jerry Lewis. [9]

-Stanley Kauffmann even gave Woody credit for putting the camera “in the right place most of the time.” [9] 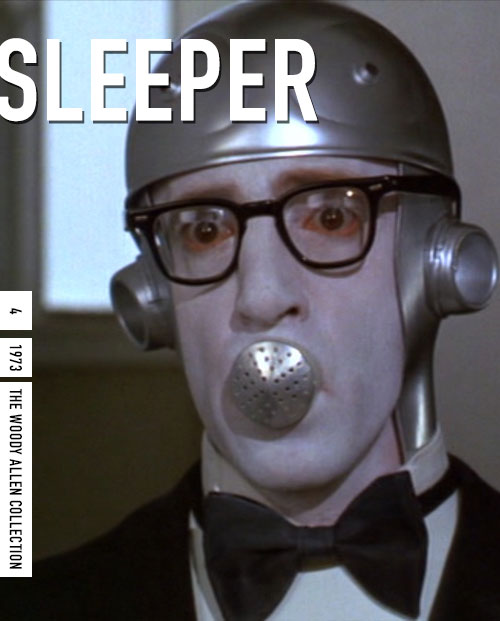 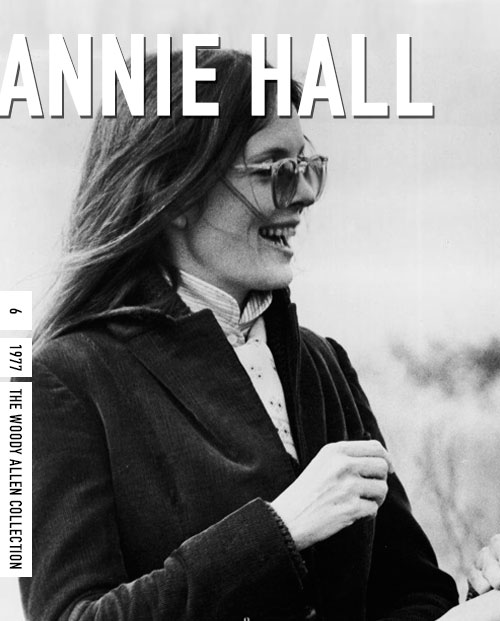