-Allen’s career would later be known for its abrupt, unexpected turns — following up grim psychodramas with goofy comedies, and vice versa — but Bananas is a textbook example of how to follow-up a hit film (in this case, Take the Money and Run). It takes what worked before and gives it to you again, except this time with a bit more edge and ambition. [2]

-His first script, Jazz Baby, was a drama set in New Orleans, but United Artists brass quickly rejected it.  Woody unfazed, came back with a script called “El Weirdo,” which would later became Bananas. [3]

-Bananas, much like Take the Money and Run, was on the job training. Woody was learning how to direct by making movies. There wasn't a film student in the country who couldn't have directed Bananas better. [3]

-Bananas was well received and performed well. Once again the critics took special notice of Woody. [3]

-The was the first film in which Woody Allen had nearly full creative control. [1]

-In an interview with Robert B. Greenfield of Rolling Stone magazine in 1971, Woody Allen said: "They say it's a political film but I don't really believe much in politics. Groucho [Marx] has told me that 'the Marx Brothers' films were never consciously anti-establishment or political. It's always got to be a funny movie first." [1] 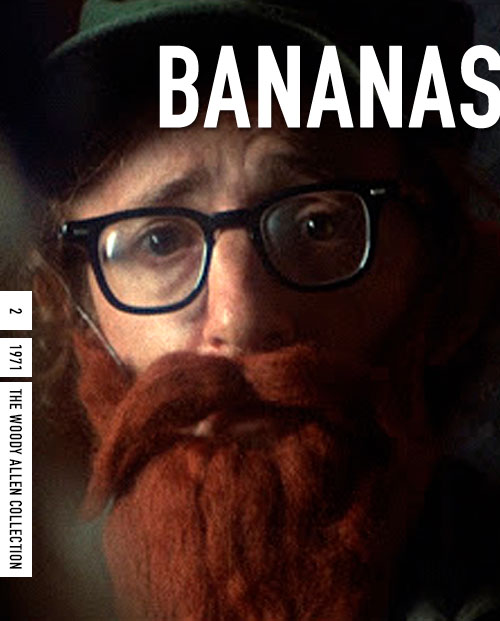 Nebbish Fielding Mellish works as a product tester for a large corporation in New York. His relationship with Nancy, a social activist, is the first he's had in quite some time. So when Nancy breaks up with him - she knowing something is missing, but not being able to put her finger on what that is - Fielding believes the way to win her back is to get into activism, most specifically to move to the Latin American republic of San Marcos, where the elected president was assassinated and replaced by General Emilio M. Vargas, a military dictator. Nancy first met Fielding in trying to get signatures on a petition for the US to break all ties with the military government. Being an American, Fielding ends up being used as a pawn between Vargas and the revolutionary forces, led by Esposito, that function of pawn which may have fatal consequences for him. The question becomes if he is able to survive whether his actions in San Marcos will produce his desired end goal of getting Nancy back. [1]

-Woody Allen: "The big, broad laugh comedy is a form that's rarely made these days," Allen said, "and sometimes I think it's the hardest kind of movie to make. With a comedy like 'It Happened One Night,' you have characters, a situation, a plot to keep things moving between laughs. But with a comedy like 'Bananas,' if they're not laughing, you're dead, because laughs are all you have." [4]

-"The Marx Brothers pictures were like that. The story line was the flimsiest excuse, just something to hang the laughs on. Nobody cared, in 'A Night at the Opera,' whether the performance comes off..." [4]

-Woody said he thinks comedians should direct themselves, generally speaking. The performance and the point of view have to coincide, he said, and one of the weaknesses of Mel Brooks' "The Twelve Chairs" was that Mel wasn't in enough of it. [4]

A New Way of Life

-He stopped carrying cash. Relied on friends for pocket change. [3]

-He purchased extremely hard to get season tickets to the Knicks. [3]

-Woody bought a Rolls-Royce with driver. [3]

-He bought 2 Penthouses on 5th Ave and then converted into a suitable duplex for additional tens of thousands of dollars. [3]

-Seldom showed up for family gatherings. When he did he only stayed a few minutes. [3]

-He bought his parents a co-op on the Upper East Side and a vacation home in Hallandale. [3]

-They insisted they were proud of him. [3]

-Marty his dad did buy a ticket once to see one of Woody’s films and said, “I don’t understand the crap he’s writing.” [3]

-Howard Cosell was allowed to improvise most of his part. [1]

-The rebels' anthem is the same one used later in Sleeper. [1]

-Woody Allen said he made a conscious decision not to show any blood to maintain the light, farcical tone of the film. [1]

-In an interview, Woody Allen was asked why he named the movie "Bananas". His response: "Because there are no bananas in it." [1]

-According to the Eric Lax biography, the musicians in the dinner scene at General Vargas' house were actually to be playing instruments, but the rented instruments hadn't arrived, and rather than wait, Allen decided the miming would fit with the tone of the film. [1]

-The majority of the scenes in the film were improvised. When Allen felt he had captured the right shot, he would move on to the next one. [1]

-Woody Allen initially intended to end the movie with him emerging from a riot with his face darkened from soot; the black rioters would then mistakenly claim him as one of their own. As with Take the Money and Run, Allen's editor, Ralph Rosenblum, convinced him to go with an ending more organic to the story that came before it. [1]

-A very young Sylvester Stallone appears in the subway scene playing a hoodlum with another youngster. [1]

-Woody Allen initially sent Stallone back to the casting agency after deciding he wasn’t “tough-looking” enough. Stallone pleaded with him, and eventually convinced him to change his mind. [2]

-The movie's mock-TV ad for New Testament cigarettes earned the movie a "Condemned" rating by the Catholic Church. [1]

-In the middle of the movie, during the turmoil that surrounds the dictatorship at San Marcos, outside, an old baby-carriage can be seen rolling off a stairs. This is a direct reference to the most dramatic scene in Sergei M. Eisenstein's classic Battleship Potemkin. [1]

-The name of the fictional Latin American country was "San Marcos." [1]

-Third and final of three films that writer Mickey Rose co-wrote with Woody Allen. The first two films were What's Up, Tiger Lily? and Take the Money and Run. [1]

-The proclaimed national language of the South American country "San Marcos" was Swedish. [1]

-The picture was originally conceived as a star vehicle for actor Robert Morse. [1]

-United Artists is a New York-based motion picture company that seemed to be made to order for someone like Woody Allen. An oddity in the Hollywood system, UA is a film studio with a physical studio and it had no a lot no wardrobe, property departments, no contract players or star salaries. Their headquarters is located in downtown Manhattan, 3000 miles away. [3]

-UA dates back to 1919, when it was founded by four silent era superstars-Charles Chaplin, DW Griffith, Mary Pickford, Douglas Fairbanks. [3]

-UA released The African Queen, High Noon, Marty, Some Like It Hot. In the 1960, when Hollywood was in a slump, UA prospered thanks to their James Bond, Pink Panther and Beatles movies. [3]

-Woody tried to interest United Artist in financing his first picture but was unwilling to put up more than $750,000. On the strength to Take Your Money and Run, his agents were able to hammer out a three picture contract that would give their client $2 million budget and fees of $350,000 for writing directing and acting. [3]

-UA distilled on Woody an extraordinary production deal that was unprecedented for a commercial artist. Basically he could make any film he liked on any subject he liked, He saw this blank check arrangement as a nice and simple gentleman's agreement. [3]

I once stole a pornographic book that was printed in braille. I used to rub the dirty parts.

-Review Dennis Schwartz wrote: "An attempt to capture the same zaniness the Marx Brothers had in Duck Soup."
‍
-Every Woody Allen Movie website wrote, “We are now at pretty much the half-way point between What’s New Pussycat and Annie Hall. Based on this, Bananas is almost exactly what you would expect it to be. Much sillier than his later movies, not as silly as the previous ones. These are the “early, funny movies” — an innocent categorization that would later (especially in Stardust Memories) take on a bitterness as it became associated with Allen fans lamenting his increasing humorlessness as the ‘80s began. Maybe I’ll start longing for these more innocent and light-hearted days nostalgically, but right now, I feel about ready for some change.” [2]

-Dave Kehr for Chicago Reader wrote, “It is a funny picture - not too consistently, and certainly not too coherently, but when it hits, it hits.

-Variety’s review stated, “Bananas is chockfull of sight gags, one-liners and swiftly executed unnecessary excursions into vulgarity whose humor for the most part can't make up for content.”

-Vincent Canby for The New York Times wrote, “Allen's view of the world is fraught with everything except pathos, and it's a view I happen to find very funny…Allen is his own best actor, diffident and defensive, but I also like Miss Lasser (the former Mrs. Allen), who reminds me of a young Elaine May, and Carlos Montalban, as a Castro-like freedom fighter…Any movie that attempts to mix together love, Cuban revolution, the C.I.A., Jewish mothers, J. Edgar Hoover and a few other odds and ends (including a sequence in which someone orders 1,000 grilled cheese sandwiches) is bound to be a little weird—and most welcome.

-Phil Villarreal for the Arizona Daily Star wrote: "A severely overrated Allen project. This campy string of unfunny gags does not hold up." 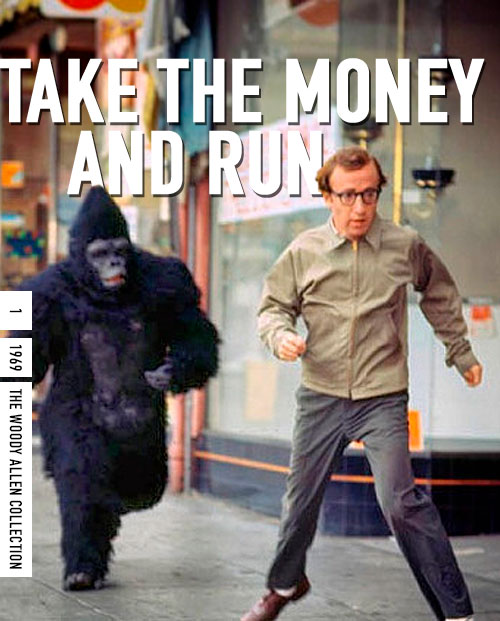